Sunnyside is home to a dynamic and diverse group of merchants. Each month, Sunnyside Shines profiles a merchant in our e-newsletters.

Robin Kawada of Takesushi has a passion for the freshest fish

Do you consider yourself passionate about fresh food? Well, then you’ll have a lot to talk about with Robin Kawada, owner of Sunnyside’s delicious Takesushi restaurant on 42nd Street just north of Queens Boulevard.

Kawada, a former fish distributor, is so committed to serving only the freshest, seasonal fish that he treks to the New Fulton Fish Market in the Bronx every morning in order to purchase the best available fish that day. His menu is constantly changing to reflect the different types of fish he is able to bring in. “I decide the lunch special every morning after coming back from the fish market,” Kawada says. “Most restaurants use wholesalers, but working directly with the distributors at the fish market I get a better quality, selection and price.” Kawada should know – he has been going to the fish market nearly every day for 40 years!

The Takesushi lunch special is truly a thing of wonder. For $12, the lucky diner is treated to a 5-6 course meal of small appetizers, sashimi, steamed or fried fish and soup, or a special consisting of meat and cooked fish, with homemade dumplings and appetizers.

Kawada is concerned about negative health effects from cheaper foods, and worried that as a society, we’re spending our money on hospitals and medication rather than eating fresh food. This philosophy carries over into the Takesushi menu, where he lists countries of origin for most fish, and notes whether fish are wild caught or farmed. Aside from the fish, much of the produce served during the summer and fall months comes right out of his sister’s garden in Westchester.

Takesushi recently got into social media and have been posting some great photos of the ever-changing menu and news about the restaurant. Follow them on Twitter and Facebook, and be sure to swing by the restaurant for an excellent meal in Sunnyside. 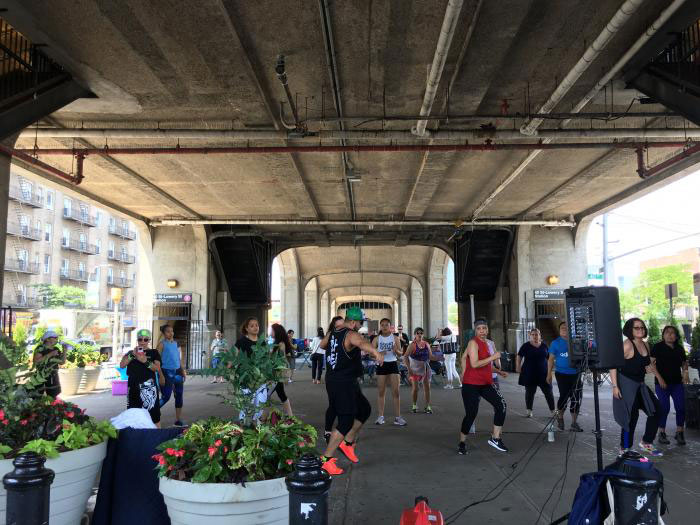 Stay fit with free daily Zumba classes in Lowery Plaza (at 40th Street and Queens Boulevard, under the elevated 7 train.) Local business owner Maria Calderon of Paper Plus Printing leads a class that will keep you looking and feeling great! Classes take place daily from 6-7 p.m. on weekdays and on weekends from 10-11 a.m.