The contest was launched to find the best holiday window displays at local stores. Thirteen entries were received in the contest representing nine different businesses. The contest kicked off on Small Business Saturday (November 29) and took place entirely on social media, where individuals could enter the contest and vote on Sunnyside Shines’ Facebook page. The deadline for entries and voting was December 24 at 5:00pm. Individuals could vote in the contest once per day, and the top three stores whose photos generated the most votes were declared the winners. The photographer of the individual photograph that received the most votes was also awarded a prize. The contest generated more than 1100 votes.

“We hoped to encourage Sunnyside stores to create a festive holiday shopping environment,” said Rachel Thieme, executive director of the Sunnyside Shines Business Improvement District. “The holiday window contest was a fun way to engage businesses and local residents to get into the ‘shop local’ holiday spirit.”

“The holiday window contest improved business. I saw more people coming in to look at our windows because of the contest,” said Ayman Kasem, manager of Sunnyside Thrift Shop, the first place business.

The holiday window contest was one component of Sunnyside Shines’ strategy to promote local shopping in Sunnyside during the holidays. Other components included the first-ever Shop Local Holiday Gift Guide, which included gift ideas and coupons at local stores, a Small Business Saturday event, and festive holiday lighting installed throughout the district. 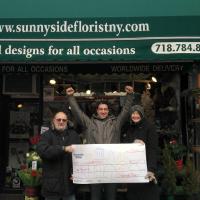 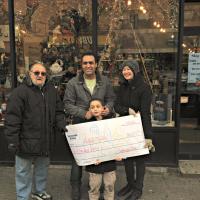 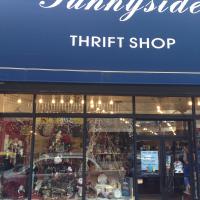