Bliss Plaza, the first of two new public plazas coming to Sunnyside, Queens opened today in a ceremony attended by several local elected officials, including Council Majority Leader Jimmy Van Bramer, NYC DOT Queens Borough Commissioner Dalila Hall, and Queens Community Board 2 Chairman Joe Conley. Bliss Plaza, located at the intersection of 46th Street and Queens Boulevard, under the elevated 7 train, has been transformed from an underutilized underpass into a vibrant public space with seating and colorful planters. The plaza is a part of the New York City Department of Transportation’s NYC Plaza Program and will be managed by the Sunnyside Shines Business Improvement District.

In the summer of 2013, the Sunnyside Shines BID submitted an application to the NYC Plaza Program. Majority Leader Jimmy Van Bramer supported the application, along with other local elected officials and community stakeholders. In early April 2014, they were notified that the application was accepted. The program commenced with a community outreach meeting on April 30 and was approved by Queens Community Board 2 in June. Construction on the Bliss Plaza, which included leveling out the former roadway to form one level pedestrian space, was completed by NYC DOT in early July.

By this fall, the Lowery Plaza at 40th Street and Queens Boulevard, also under the elevated 7 train, is expected to open as well, which will also include tables, chairs and decorative planters. Both plazas will be open year-round, from approximately 9am until dusk. The names of the plazas are derived from the original street names for 40th Street (Lowery Street) and 46th Street (Bliss Street). Both areas were already closed to traffic prior to their designations under the NYC Plaza Program.

Sunnyside Shines BID has contracted with the Neighborhood Plaza Partnership (NPP) for partial maintenance of the plazas and the plantings. NPP is a project of the Horticultural Society offering horticulture and maintenance services utilizing workforce training programs that provide training and jobs to formerly incarcerated and homeless populations.

“These new public plazas have transformed the space under the 7 train with green space, ample seating and cultural programming,” said New York City Council Majority Leader Jimmy Van Bramer. “Tens of thousands pass these spaces everyday but with these changes they will use them to meet friends, enjoy their neighborhood and create community.”

“We are excited to partner with Sunnyside Shines and help create 6,000 sq. ft. of improved public space for this neighborhood,” said NYC DOT Commissioner Polly Trottenberg. “The new tables, chairs and planters are for everyone to enjoy and we look forward to returning this fall to start on the second plaza.”

“The creation of Bliss Plaza is a wonderful addition to the Sunnyside neighborhood that will serve as a pedestrian oasis and as a beautiful centerpiece of a thriving shopping area,” said Queens Borough President Melinda Katz. “I commend the city’s Department of Transportation for all the work it has done to make this new neighborhood plaza a reality and I thank the Sunnyside Shines Business Improvement District for initiating this project and for its commitment to maintaining the plaza and to providing programming there.”

“The opening of Bliss Plaza marks a great day for Sunnyside, a neighborhood continuing its rise as one of New York City’s great neighborhoods,” said Senator Michael Gianaris. “This plaza will not only be a wonderful space for people to enjoy the outdoors in our neighborhood, it represents the exciting growth and activity taking place in Sunnyside every day as more New Yorkers come here to live, work, and raise their families. I congratulate Sunnyside Shines on this landmark achievement, and I look forward to continuing our work together to make Sunnyside an even more inviting community.”

“I am thrilled that opening day is finally here! Bliss Plaza is an oasis for pedestrians along busy Queens Boulevard and will be a fantastic place to have an outdoor lunch,” said Rachel Thieme, executive director of Sunnyside Shines. “This is a huge benefit to neighborhood residents and businesses. We are thrilled with the high quality of work that the NYC Department of Transportation has put into this project and extremely grateful to Council Member Van Bramer and our other local partners for supporting our application.”

“We are so proud to be able to bring greenery and a new public space to the middle of the neighborhood,” said Sunnyside Shines board member Chris Winchester. “We thank the NYC Department of Transportation for transforming the space into such an asset for Sunnyside.”

Sunnyside’s application to the NYC Plaza Program had broad community support with over a dozen letters of support from community stakeholders, including elected officials, business owners, property owners, residents and community organizations.

Photos 1-6 below by Mary Teresa Giancoli 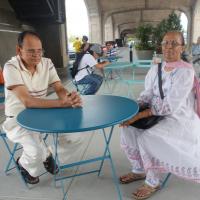 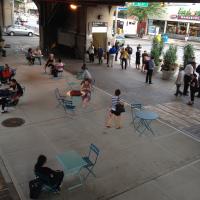 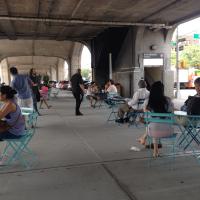 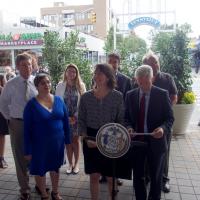 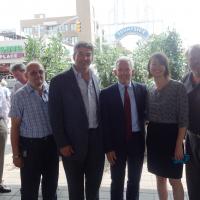 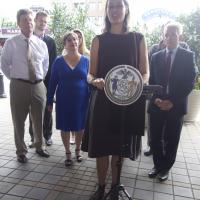 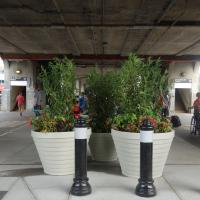 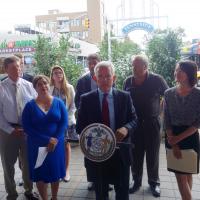